Chanterelle mushrooms are a class of mushroom (genus Cantharellus) with many sub-species which have minor differences in appearance and texture. The main chanterelle species described here is Cantharellus cibarius, the golden chanterelle. The name stems from the ancient Greek word Cantharos which translates to “cup” referring to their appearance. Nearly all chanterelle mushroom species are edible, however, they have a poisonous look-a-like (the Jack O’Lantern) so be extra careful and read the sections below on where to find them and how to identify them correctly.

Where To Find Chanterelle Mushrooms

Chanterelle mushrooms grow natively in North America , Eastern Europe, Asia and some African regions. You can find them in forests and particularly with hardwood and softer trees such as oak, birch, pine, fir, and maples.

Due to the fact that they need adequate amounts of moisture and heat to develop, their peak growing season is during (wet) summers and early to mid autumn.

How To Identify Real Chanterelles And Avoid False Ones

The most common and obvious characteristic of the chanterelle species is that they have a sunny orange surface which is more highlighted in the edges of their caps. Their stems naturally fade to a light yellow or beige color and the flesh inside is typically off-white. Shape-wise, they have a funnel-like cap which is smooth and meaty to touch.

A very important characteristic that sets them apart from similar species, is their forked ridges and their blunt edges. The first runs down the upper stem of the mushroom, which serves as an extra identifier. Also, many chanterelle species emit a sweet and tarty scent that resembles that of apricots.

Technically speaking, it’s nearly impossible to grow chanterelle mushrooms in a pot indoors. This is due to their mycorrhytic nature, which requires the presence of decayed tree roots and decaying surrounding plants. This is why you won’t find any chanterelle mushroom growing kits with containers and tools you can use at home.

However, you may find mycelium, spores and special soil which you can use in your own yard if you already have decayed hardwood trees or plants. Here are the basic steps:

Note that, in some cases, it may take a few years for the mushrooms to grow abundantly in multiple clusters.

Chanterelle mushrooms contain significant levels of amino-acids, riboflavin, fiber, iron, manganese, zinc, copper, and potassium. This combination of nutrients and minerals can be useful in cases of anemia and physical or mental stress.

When they are also subjected to sunlight, they also yield significant amounts of a Vitamin D form known as ergocalciferol. Vitamin D helps maintain bone and tissue health and also fights mild depression.

In addition to the above, chanterelle mushrooms contain flavonoid compounds such as rutin and quercetin. These compounds support the activity of the immune system. They also help decrease the accumulation of substances like excess iron in the liver, enabling it to function more effectively.


Chanterelle mushrooms are famous for their rich nutty flavor and slightly fruity aroma and undertaste. You can eat them whole or cut into large bite-sized slices. Because of their size and texture, they are perfect for grilling, sauteing, roasting, and pickling. They also cook more quickly than button mushrooms and generally require 3 minutes on the stovetop or up to 10 minutes on the grill, with either oil or any other edible fat. 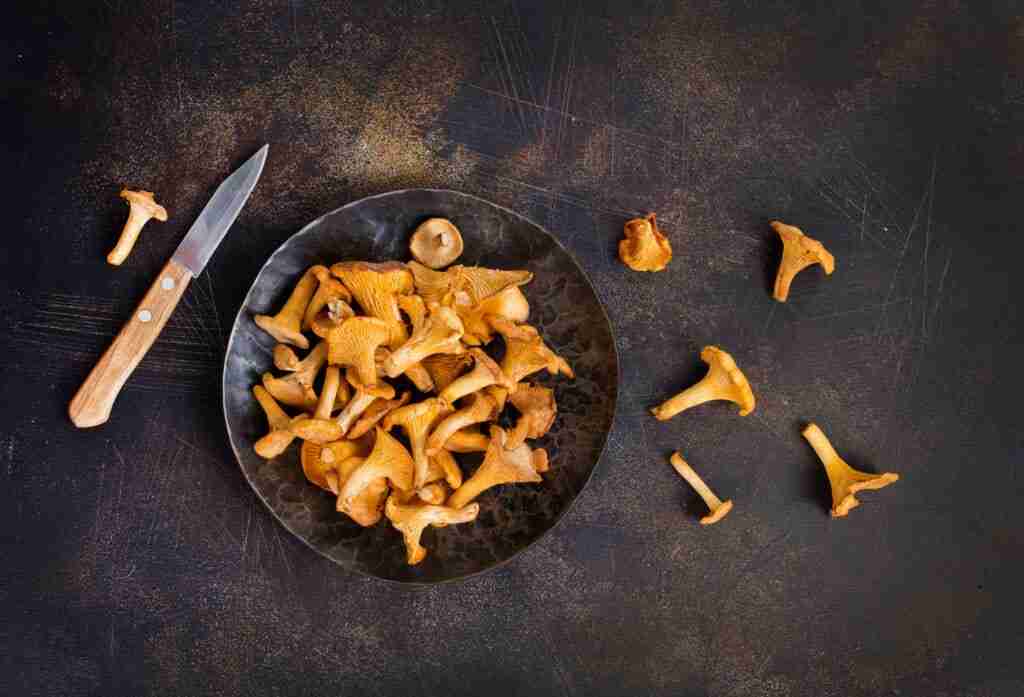 A good and simple recipe that makes the most of their flavor, is to clean them with a wet cloth and marinade them lightly with olive oil, lemon, a bit of thyme and garlic powder and keep them in the fridge for half an hour. Then turn your oven’s broiler on or heat a charcoal barbeque and cook them on high heat for approximately 5 minutes on each side. Season them with extra salt and pepper, if required.

Keep in mind that these beauties are better cooked in their fresh and whole form. This is because they tend to lose much of their taste and aroma when dried or powdered. However, if your sole intention is to get some nutrients out of the mushrooms and possibly preserve them for longer periods of time, you can dry them or pickle them in brine or vinegar.

Overall, while chanterelle mushrooms can be tricky to grow, finding and harvesting them from the wild is totally worth the effort. This is because, for many chefs and amateur cooks, these are amongst the best-tasting mushrooms in the world.

Chicken of the Woods Mushrooms