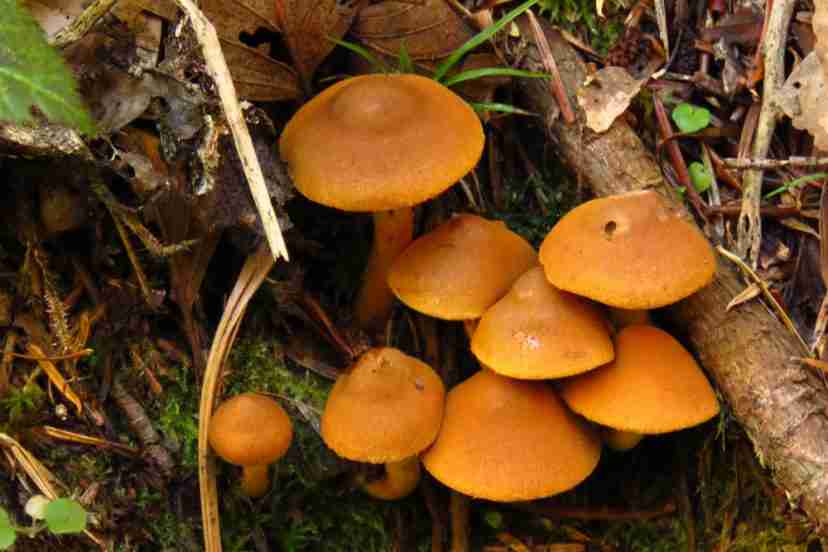 Funeral bells, deadly galerinas or deadly skullcaps (scientific name Galerina Marginata), are a poisonous species of fungi belonging to the family of Agaricales, which are gilled mushrooms. The German mycologist Robert Kuhner gave them their scientific name Galerina Marginata changing it from the previous name Agaricus Marginatus, given by German mycologist August Batsch. “Galerina” translates to ‘like a helmet’ and the epithet “marginata” means ‘marginalised’ or bordered, referring to the outer appearance of the mushrooms.

Once the fungi comprised five sub-species. However, in 2001, Norwegian mycologist Gro Gulden classified them all as the same species because there were no notable differences between the DNA patterns of the various sub-species.

Where To Find Galerina Marginata Mushrooms And When

The fungi’s natural habitat includes northern hemisphere regions such as Northern Europe, the UK, Ireland, North America and some Asian countries such as Japan and Iran. The mushroom also grows occasionally in Australia and Northern Canada. The mushroom is saprobic in nature, which means that it derives its nutrients from decayed or dead organic matter such as decayed trees.

Galerina Marginata congregate mostly on or around coniferous trees such as firs, pines, junipers, and cedars. In some regions they grow near hardwood trees. The reason why they prefer to grow on or near softer coniferous trees is the release of particular enzymes that are capable of breaking down wood fibers, especially fibers of softer woods.

The mushrooms typically grow in small clusters of three to four fruiting bodies but they also grow on their own as well. They grow on the logs or roots of decayed trees. But you may also spot them in buried logs too, looking as if they are growing from the soil.

Their peak season is late summer to mid-autumn.

How To Identify Galerina Marginata

As their scientific name suggests, Galerina Marginata have a hemispherical cap that resembles a helmet. The cap diameter ranges from 0.6 to 1.5 inches (1.7 to 4 cm) and there are distinct margins in the curved down edges of the cap. Once the fruiting body matures, the cap becomes gradually broader and flatter. The middle of the cap in younger mushrooms has a tan orange-brown shade. This color fades out to a mustard yellow hue towards the edges, with light yellow margins. The shade of the cap may also slightly change according to surrounding humidity levels. The caps have a smooth and fluid-like texture.

The gills are narrow and dense and have a nude beige hue when young which becomes slightly rusty as they reach maturity. When you turn them upside down and look closely, you may also notice that they have shorter gills which don’t stretch entirely from the cap to the stem.

The Galerina Marginata stem is narrow and stretches anywhere from 0.7 to 2.75 inches (2 to 7cm) in length. It is solid and firm when the fruiting bodies are young but eventually becomes more fragile and curved once the mushrooms mature. The stem also bears a soft and fragile ring in the upper part of the stem. This ring may disappear with maturity. Their spore print is a light snuff brown and has an ellipsoidal (egg-like) shape when magnified under a microscope.

Galerina Marginata mushrooms look similar to some edible species and especially gilled mushroom species. The fungus Pholiota Mutabilis (sheathed woodtuft) is a common look-alike. This has a similar fruiting body to that of galerina marginata. However, the woodtuft has brownish scales which distinguish it from the Galerina. These scales start from the base of the stem to the level of the ring. The woodtuft also has a distinctive spicy scent that is not present in galerina marginata mushrooms. Another species that shares similar attributes with Galerina Marginata is Armillaria Mellea (honey fungus). However, Armillaria Mellea grow in larger clusters of five or more fungi and grow mainly on hard woods.

The toxicity of Galerina Marginata is attributed to a class of poisonous substances known as “amatoxins”, which are also found in the infamous death cap mushroom which are the source of 90% of deadly mushroom poisonings in humans. The toxins inhibit the natural production of metabolic enzymes in the body and eventually accumulate in liver and kidney cells. This leads to fatal organ damage. The kidneys will attempt to filter out the poison. However, the amatoxins will cause damage to the renal tubules. They will also re-enter the bloodstream, causing further damage.

The first symptoms of toxicity include vomiting, nausea, diarrhoea, and intense abdominal cramps. In the later and most critical stages of poisonous infection, gastrointestinal bleeding, coma, kidney failure and liver failure may occur within 7 days following their ingestion. These problems may lead to death if untreated. The ratio/dosage that causes fatalities in humans is estimated to be 0.1mg/1kg of human body mass. For instance, a child weighing 44 lb (20 kg) will be poisoned fatally after the ingestion of 10 fruiting bodies containing 200μg of amatoxins.

Galerina Marginata symptoms may not show up early. They are often mistaken for other conditions or totally ignored. Because of this, it is particularly difficult to treat the poisoned patient in the later stages of poisoning. Furthermore, there is no universal antidote for amatoxins. However, doctors may use charcoal for filtrating the patient’s blood in some cases. This would be carried out while carefully monitoring the liver enzyme levels and providing intensive care when necessary. In some cases, a liver transplant is the last resort to treat kidney failure.